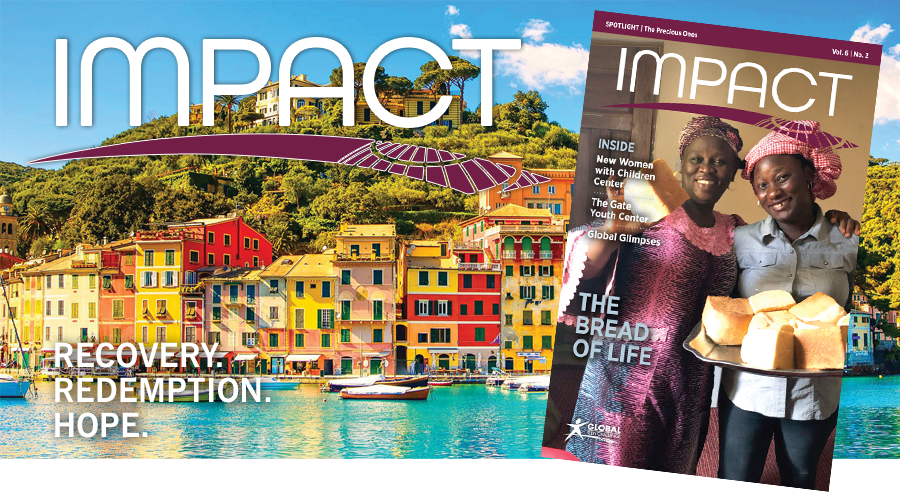 The Bread of Life

The scent of baking bread drifts through the air carried on a light breeze across the streets of Jos, Nigeria. It has a slightly sweet, yeasty aroma that makes you hunger for a bite. It’s market day and the eight women who live at Destiny Teen Challenge Women’s Center have been up early baking bread to sell.

The women have come from different backgrounds, but all for the same reason. They are former drug addicts, juvenile delinquents, and prostitutes, or they have come to escape abuse or to pay the price for child neglect. They have come to heal and start over by building a life with Jesus Christ whom they have just met.

Jesus declared, “I am the bread of life. Whoever comes to me will never go hungry, and whoever believes in me will never be thirsty.” – John 6:35

As the bread bakes, the women gather round to enjoy fellowship through their daily Bible Study. They begin by saying The Lord’s Prayer in unison: “Give us this day our daily bread.” It is explained to them that this part of The Lord’s Prayer shows a request for both a physical and spiritual bread from the Word of God. They learn about how Jesus multiplied the loaves of bread to feed the crowd, and how bread became a sign of sharing. We are to share not only physical nourishment to others, but to share the Gospel so that others
may live.

As well as being nourished through The Word of God, the women are taught a life-skill that will help sustain them after they leave this Teen Challenge program – bread making. It is one of several micro-businesses available for them to choose from (fashion designs, hair turbans, or bread making).

The women have been given a gift from God, the bread of life. And so it is with us. We are reminded of this gift through God’s only son, Jesus Christ, when bread came to represent the body of Christ which was broken for us and our sins. The bread of life is not physical bread, but the bread of spiritual renewal found in the salvation of the blood of Jesus Christ. 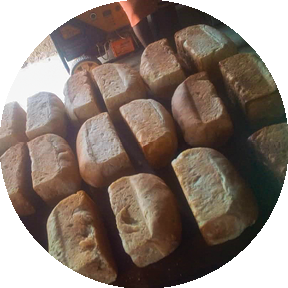 It started with a dream. In fact a calling to do something extraordinary that would be life impacting. Not just a quick cure, but a movement in both the spiritual realm and the physical being.

There was already a men’s center nearby, but Mada Akkuzoda wanted something for the women. A safe place they could call their own to draw closer to God.

The calling became a reality in 2020, right in the middle of the COVID pandemic. Mada and her husband, Kuanysh, decided to plant a new women with children’s center in their homeland, the Republic of Georgia. They would name the center, “The Precious Ones.”

The property was in desperate need of renovations. The men from the nearby Teen Challenge men’s center generously assisted with the necessary repairs. 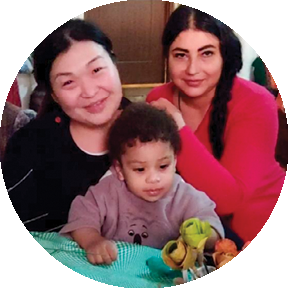 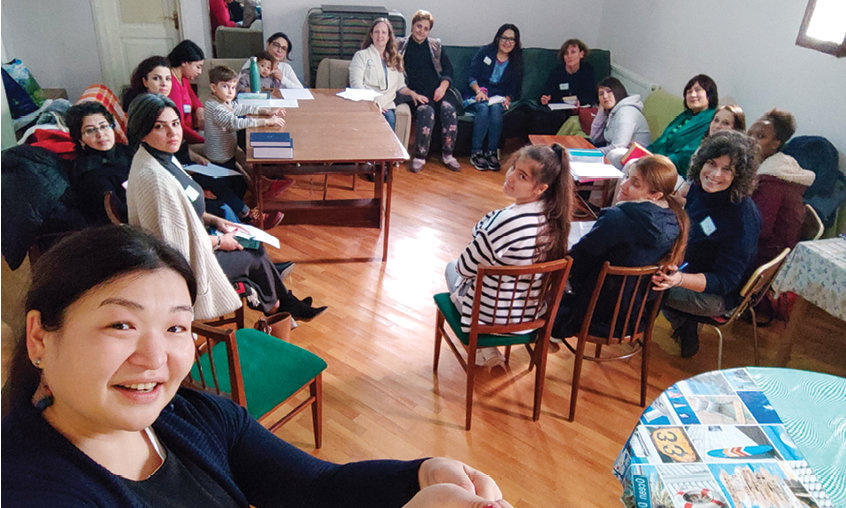 Mada was prompted by the Holy Spirit to use the center to reach the Muslim women at a nearby refugee camp. A few months ago she opened the doors to “The Precious One” home for a Bible study, and many Muslim women took part.

They began gathering each Wednesday for nourishment of the body with a hearty lunch, then transition to nourishment of the soul through the World of God. The room would come alive during this worship time as the women would dive deep into His Word. “You can see and feel the transformational change in these women as God touches their hearts,” said Mada.

One of the Muslim women, A’l, who is from the Arab Emirates, has been attending the weekly study for several months. She has been fully immersed in her studying, researching, and asking many questions. She has given her heart to Jesus and is encouraging other women to surrender to Jesus and receive their salvation. Many women are being won for The Lord at the center.

As the program continues to grow, Mada and Kuanysh, along with the women at the center are in prayer for the funding of two small houses on land near “The Precious Ones.” The costs of the two houses is $35,000. You can partner with Mada and Kuanysh in helping to grow God’s Kingdom by sponsoring the purchase of these two houses. 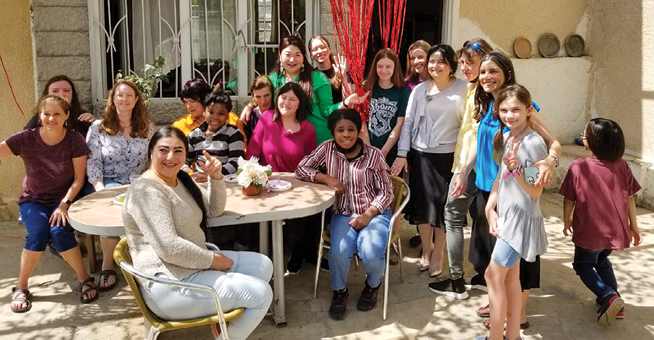 I'll Meet You at The Gate

“Be strong and courageous. Do not be afraid or terrified because of them, for the Lord your God goes with you, He will never leave you nor forsake you.” Deuteronomy 31:6.

In late 2020, during the midst of the COVID pandemic, Stephen, a teenager from The Netherlands, began questioning his future.

He felt helpless with no arrows pointing the way for the next steps to take. He always felt overlooked and alone and found it difficult to make friends and connect with others. Isolation had become the norm for him.

Stephen became depressed and lacked hope. That’s when he found The Gate, one of eight Teen Challenge Netherlands youth centers that provide addiction prevention for teenagers by providing them the gospel, fellowship, and guidance. The Gate reaches over 1,500 youth each month at its locations—each offering a safe place for youth in country towns where boredom leads to high addiction rates.

As Stephen began interacting with others at The Gate, he began to find like-minded youth that eventually became his friends. He began to feel seen, heard, and liked by others who seemed to care about him.

During the summer of 2021, Stephen started to grow in his faith and accepted Jesus as his Lord and Savior, and got baptized.

Now, this teen who had difficulty connecting with others, often invites people to The Gate where he “lights up” during worship. “I now have a deep passion for Jesus. I knew all this time when I was lost that Jesus was looking for me—just like He was looking for the lost sheep in the Bible. I know I am found now. Jesus met me at The Gate and built a relationship with me that will last forever. And I want to share that with others so that they may experience peace.”

As Stephen states, “At my lowest moment, I asked myself, ‘What is there in my future?’ There was a lot of hopelessness there. But now, I’m filled with hope knowing that God wants to use me and has a plan for my life.” 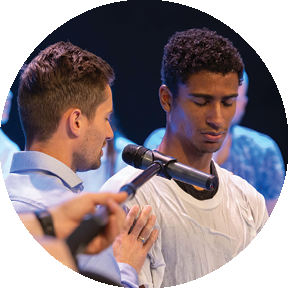 In 1969, TC Netherlands became Teen Challenge’s first European center.
Since then, TC Netherlands has experienced a long history of expansion and success. The Gate is a nationally recognized effective youth program. It reaches over 1,500 youth each month at its eight locations, each offering a safe place for youth in country towns where boredom leads to high addiction rates.

Taking their testimonies and dramas to churches, schools and directly to the streets where they minister to those dealing with drug addictions and prostitution. Teen Challenge Dominican Republic keeping it real promoting the love of Jesus.

Ministering to those who recently experienced flooding in Bombay where they lost everything. Helping in body and spirit for those who are suffering.

Managing their Thrift Store to help support their ministry, Teen Challenge International Victoria, while giving training to their students shows them how to sustain themselves after they graduate the program.

Let Me Tell You

My Name is Jahim, and I am from Grenada...

My country lies in the Caribbean Sea. It is northwest of Trinidad and Tobago, and about a hundred miles north of the coast of Venezuela.

I was a teenage drug dealer, working the streets and dealing weed (marijuana) in the alleys. It’s how I made my living until I was caught by the authorities and sent to juvie (juvenile detention program). I thought my life was over.

One day, a man came to visit me in juvie. He said he had an opportunity for me to learn a new way of living. He talked about Teen Challenge where I could learn a new skill instead of selling weed. He spoke about a man named Jesus who could help me find a better way to live. I joined the Teen Challenge program and my life began to transform as I 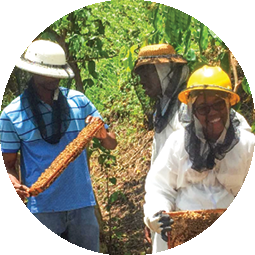 learned about Jesus and acquired new working skills leaving my drug dealing days behind me.

Teen Challenge Grenada introduced me to their beekeeping program and it would quickly change my life. I began looking to the bees as my example on how to live a better life in my community while following and listening to Jesus’ guidance. No more lying or stealing. No more selling weed. 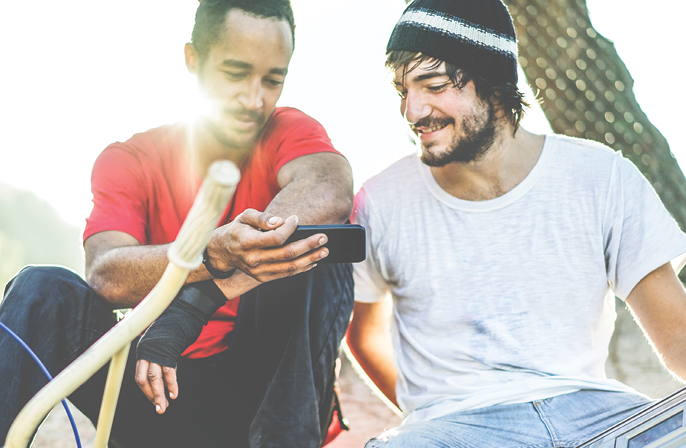 24/7 support right in your pocket!

Digital Care Network (DCN), a subsidiary of Global Teen Challenge, is a virtual care system that connects those struggling with substance abuse and mental health issues to a recovery community, resources, and providers. DCN provides:

• Small Groups providing support for the addict in their recovery

Connections and Support. We all want and need connections and support in order to thrive, change, and become who God intended for us to be in this world. We can’t do it alone, but together we can make an impact on another person’s life, our community, and even the world. Our connections and support from folks like you are making our 1,400 affiliates around the world stronger so that they may better serve those battling addictions. That’s what Global Teen Challenge is all about, making connections and providing support.

• Connections through donor relations who help provide the financial support needed to meet the everyday needs of our global centers.

• Connections with churches who provide prayer support to help sustain our centers as they provide spiritual guidance to our students.

• Connections through corporations who provide the strong relationships needed for growth in order to improve the life for others.

I experienced some of that connection these past couple of months when I visited our affiliates in Africa and Europe at their Teen Challenge conferences. The support is strong and lives are changing for the better.

Communities are benefiting from our new centers and the skills taught to our students through our micro-businesses are providing opportunities to establish a firm foundation.

In Benin, West Africa, the Prime Minister donated 50 acres of land for a new Teen Challenge center to be built. This will allow us to serve 1,000 people at this site. And the Prime Minister’s daughter was so moved about how we are serving women with children, that she donated land in the capital city to construct a new center to serve these women who are battling addictions.

In Malaysia, a Methodist Church has formed a partnership with a Teen Challenge center to offer, not only prayer, but financial and physical support to meet the needs of the students who are healing from their addictions.

If you haven’t already, now is your time to connect with Global Teen Challenge to help us get those much needed funds out to our students and centers around the world. Every dollar counts toward our ministry. Every prayer is needed to help in the healing process for our students.

I look forward to you becoming an integral part of Global Teen Challenge and our mission to help teens and adults overcome substance abuse and life-controlling issues.

Addiction does not discriminate. Over 270 million people struggle with a life-controlling issue. Boys, girls, men, and women around the globe are looking for hope.

We have immediate opportunities for Teen Challenge programs in 33 unreached nations, but need your support. The average cost to start a program is $50,000. Would you or your church prayerfully consider adopting one of these nations?

The needs vary from region to region, but the cry for help  remains the same in every nation. Thank you for helping put hope within reach around the world. 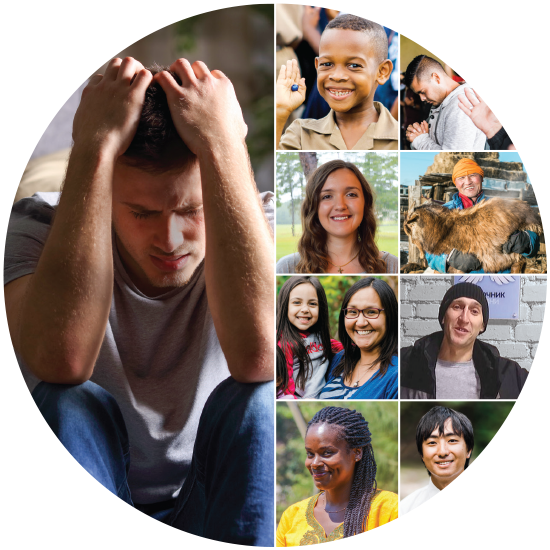 Putting HOPE Within Reach of Every Person Struggling with Addiction.

Pray for those struggling with
life-controlling addictions.

Use our secure online DONATE NOW to give hope.

Consider sharing our mission of hope with a friend.